How the Human Brain Works

Some things in life are known to use just one hemisphere. For instance, many studies have found that most written and spoken language exists in the left hemisphere. Language is one of the few things in life that is consistently recalled. It is old, unchanging, and not being created; no one constantly creates new vocabulary. From my hypothesis, the reason most language exists in the left hemisphere is because it is mostly recalled. Another study found that people tend to use the left hemisphere for tools regardless of the hand holding the tool. For any common tool, such as scissors, one must recall how it is used when using it. No one creates new ways to use the same old tool. I claim that any task that greatly favors the left hemisphere in a study will be a task based on recall instead of creation. 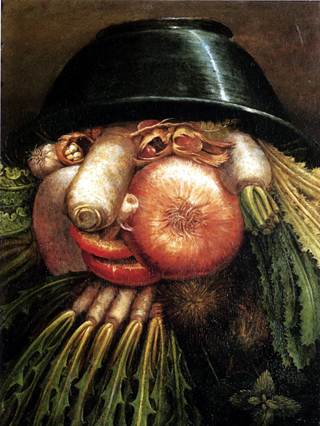 The degree of hemispheric dominance depends on the person. A left-handed person is likely to have a dominant right brain hemisphere. This would mean that information is created more often than recalled.

My other hypothesis is that the frontal lobe is based on convergence and the back of the brain (occipital, temporal, and parietal lobes) is based on divergence. Thus, in the right hemisphere, the frontal lobe uses convergence to create new thoughts and the back of the brain uses divergence to create new thoughts. My definition of convergence is induction, parallel processing, comparing, finding a similarity, and ascending a hierarchy. This is a hierarchy: 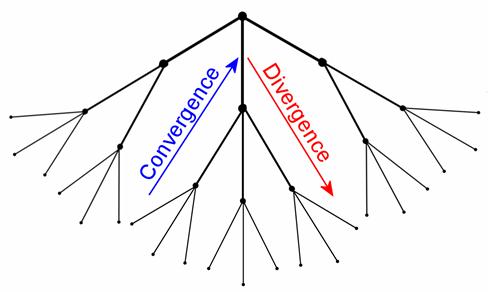 A line represents a (synaptic) connection. A node represents a thought, or piece of information (neuron). The higher the node, the more its information is shared with the other nodes. For example, three lower nodes may represent “dog”, “horse”, and “hamster”, and the higher node that connects these may represent “mammals”. In convergence, many thoughts are simultaneously used to form a resultant thought that is more general or a similarity. So convergence would be thinking of these three animals to create the thought of mammals. Divergence processes information in the opposite direction. My definition of divergence is expansion, serial processing, contrasting, finding a difference, and descending a hierarchy. In divergence, one thought is used to serially form resultant thoughts that are more specific or differences. So divergence would be thinking of “mammals” to create thoughts of these three animals.

Studies show that convergence is used create thoughts in the right frontal lobe. Studies have found that people mainly use the right frontal lobe to make decisions. When making a typical decision, a person must consider many things simultaneously to create a single course of action. This makes decision-making a prime example of convergence. Multitasking, however, is not an example of convergence because it involves completely unrelated thoughts. I believe that as multitasking ability increases, the size of the corpus callosum decreases.

An actual hierarchy exists in the human brain with a few differences from a standard hierarchy tree. Firstly, convergence and divergence are separated, which looks like this: 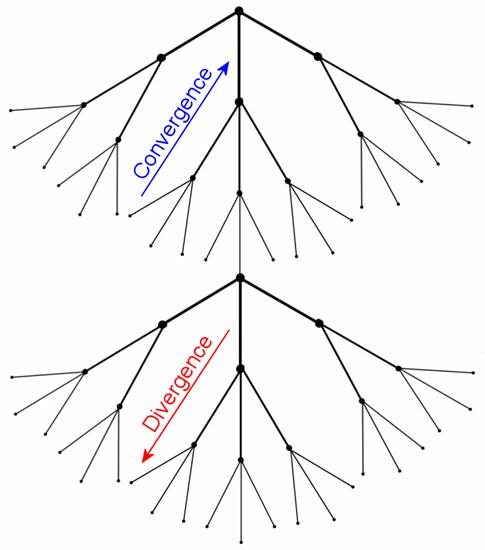 Secondly, not all thoughts are connected to each other. Lastly, it is spiral-shaped: 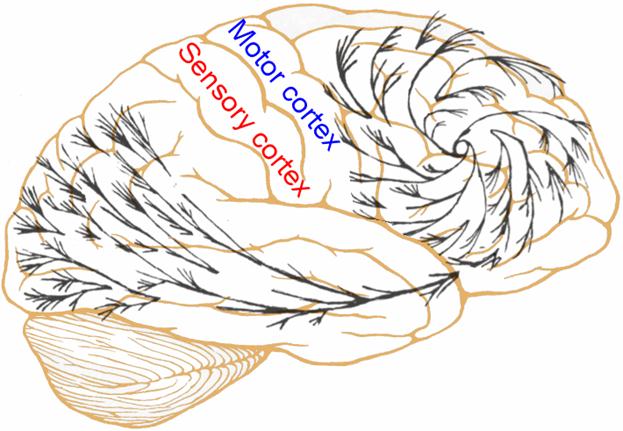 In between the hierarchies are the well-known motor and sensory cortices. These contain simple information that is not processed by convergence or divergence. For example, the thought of moving a finger is controlled by the motor cortex. This thought cannot be induced or extracted, which is why it remains separated from the hierarchy. However, there is also motor and sensory information that is related to convergence and divergence. For example, in many sports, the person with the ball must simultaneously consider the position of all the other players to make a good pass. This is convergence and movement. This information exists in the premotor cortex, which is the bottom of the circular hierarchy. Likewise, a relationship exists between sensory information and divergence. 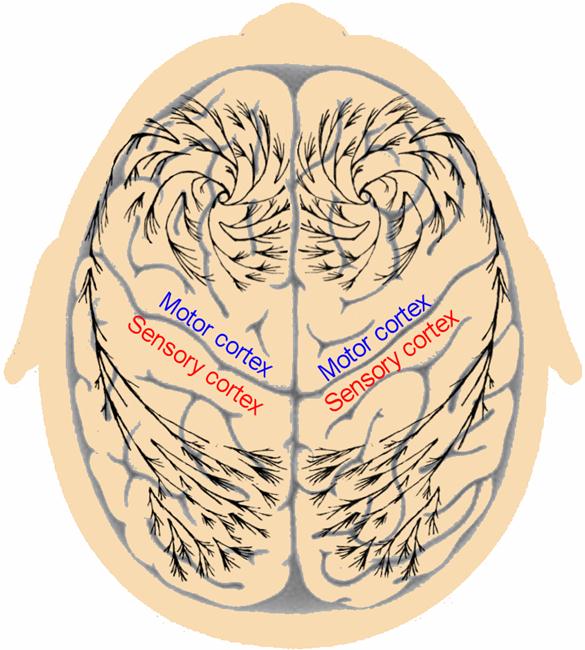 Studies provide evidence for the frontal lobe being a circular hierarchy. In one study, subjects were told to do tasks while their brain was scanned for activity. The tasks ranged from abstract, which is synonymous to general, to concrete, which is synonymous to specific. For example, an abstract task would be “make a sandwich,” and a concrete task would be “slice the bread”. The results showed that as the task became more abstract, the brain would activate more closely to the center of the frontal lobe. Another study found that the frontal lobe does not develop linearly from rostral to caudal, but rather in a centrifugal pattern: 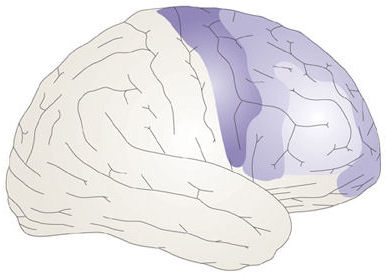 Studies provide evidence for the back of the brain, or occipital lobe, containing the most specific thoughts. The occipital lobe is known as the visual cortex because it is active when things are presented before the eyes. I believe this is a false conclusion. It is based on experiments that always presented things that would be classified as specific, such as a letter or dot. Complex visuals, such as a beach scene, activate other areas of the brain. Scientists probably believe complex visuals include extraneous variables which subjects think about rather than simply look at, thus causing this activation. Complex visuals would be classified as more-general information. According to my hypothesis, this is why it activates other areas of the brain. My hypothesis also says that the occipital lobe is not limited to visual information, but rather contains all specific information. Evidence of this comes from studies of blind people. FMRI shows that the blind use the occipital lobe, especially when it comes to recognizing minor details in sound and touch. In other words, information that is specific relative to the blind.

The degree of usage between the frontal lobe and the back of the brain depends on the person and especially the gender. A person with a dominant frontal lobe (convergence) would connect thoughts more often than separate thoughts. This person would have more thoughts that are general than specific. 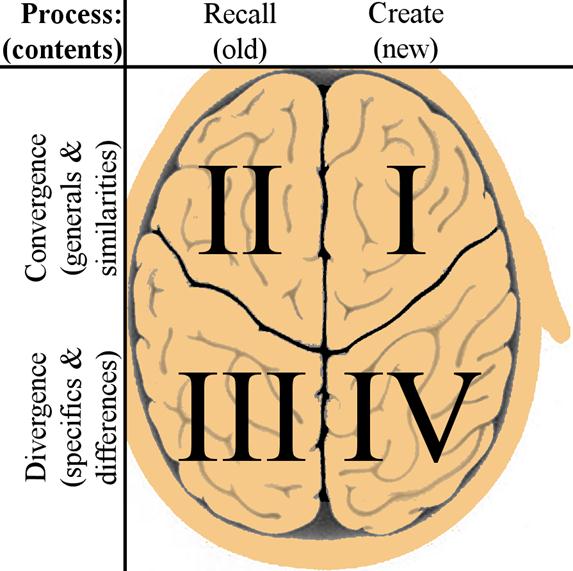